ON THE CHAPEL OF SAN PEDRO AND POSITIONING

The fourth section of the nave of the church of S. Juan of the Hospital is singular. Apparently same as the other, but it's not like that.

Its vault is stone, ashlar, original del s. XIII, as it was constructed. Its walls still keep the marks of the stonemasons and especially in the footsteps of some older buildings that no longer exist and were exploited to locate the original choir: "On the gateway…”, as described by a traveler from later centuries.

Among the tough buttresses supporting it had, on the north side, another similar Romanesque door which still exists in the second leg and is so well known, pero ésta segunda desapareció durante los bombardeos de 1812, led by General Suchet.

So close a door of another? Why? They can be seen clearly in both planes and Tosca Mancelli, drawn in the seventeenth and eighteenth centuries.

Symmetric space in front of the door, on the south side, a hood is enabled, also enters buttresses, similar to having each side. Solo similar, therefore distinguish several curiosities.

Wall background, also of stone blocks, It is irregular, oblique to the inside and forming a sharp angle in its outer trace. And, two thirds of its total length, it bends sharply inwardly and leaves a gap of nearly triangular 90 cm. deep courtyard facing south. It can not be casual or an error. Responds to a necessary and functional use.

But back to the chapel, Also noteworthy in it his nose torn, of which only a small window is seen at the top. It was blinded, in the neoclassical reforms, but still it keeps the original layout, equal to S Chapel. Miguel Arcangel. Ambas century. XIII.

It is also interesting that in the stone vault, This section of the ship, one of the blocks has an enrollment: "This church was renovated in 1704".

It was time for neoclassical covering almost all the Valencian churches, and it determines as Juan Perez Castiel began in 1686 baroque building with beautiful Chapel of Sta. Barbara, He was advancing, and with neoclassic Aires, to mask the whole church.

Unknown author can be dated around XIV-XV century. Tables are pinewood; the technique used is tempera on panel, stew and gold.

The altarpiece consists of four pieces of wood from the same period, the bottom three of the same size, assembled and arranged in three streets and three bodies. The fourth, less, form the attic. The whole iconography has a great charm for its naive drawing.

In the central panel image of San Pedro seated symbolically holds in his hands the Keys of the Kingdom, in large. The technique of this figure is higher quality than the rest of the altarpiece.

On Both Sides, separated from it by the golden crestería, hallamos dos escenas en cada calle del retablo:

In the lower body shown Nativity. You can see the position of the Child Jesus, on the floor, deposited on the mantle of his mother; This detail is shown suggestive of changes that have been happening in the representation of the Mystery of the Nativity, from the Child Jesus mayestático, deposited in the manger, Jesus-Man close, boy, in the arms of Mary.

In the lower body contemplate the Adoration of the Magi. And including the three classics.

The fourth table, attic, It represents Christ on the Cross, with the Virgin and San Juan, culmination of the Mystery of Redemption. Lacks the recovered which certainly must have.

The tabla saledizo in forming the bracelet or guardapolvo, It is back, It was added as protection. It is painted in soft shades of blue and pink, Very interesting drawing. It seems to come from a Gothic roof and has been beautifully restored in its present form by the Ministry of Culture, through the Valencian Institute of Conservation and Restoration of furniture. current placement was considered better, separated from the tableau, as it is of later time, s. XV-XVI.

This sober altarpiece bill, keeps similarity of style with the art of the High Aragon or "Aranes": flat bottoms, the clothes of the figures substantially equal, anatomies very similar, detalles del estofado e dorado del mismo taller… until cresting is almost the same.

In the images we can see the first state of the altarpiece and its restoration and placement, But some details of resemblance to other altarpieces and his naive stroke.

The altarpiece in its original condition when he arrived in San Juan of the Hospital from an antiquarian.

Frames for mounting after restoration.

Frames for mounting after restoration.

Details of the offering of one of the Magi to the infant Jesus. air, deposited barefoot Mary.

Detail of the Nativity of Jesus, before and after restoration.

Detail of the Nativity of Jesus, before and after restoration.

Altarpiece of San Juan of the Hospital, s. XIV

PHOTO GALLERY of the Altarpiece in high resolution: 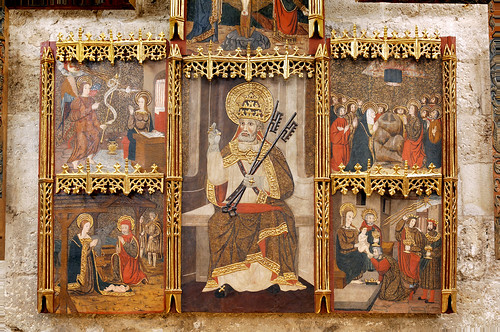