Ringed column to the main arch.

Inside the church of San Juan of the Hospital of Valencia surprised many things, but perhaps one of the most curious are the califales columns of the S. X, pink marble with honeycomb capital, which form the main arch of the church. They are placed on two Roman marble ringed shanks white. They are identical to those found in the Museum of the Alhambra and the Cordoba, They come all of the mythical Medina Azahara.
Ringed column transverse arch. With capitals Islamic Caliphate of the S.X. In the southern shaft Hebrew sign depicting ivy.

How did they get here? When and why?

The first written records known that speak about the year 714 all the territory that today is the Valencian Community was already a Muslim.

Around the year 800 he was appointed governor of the Levant, including Barcelona and Huesca, el rey del Tío Al-Hakam Abd Allah ibn `Ab gift-Rahman ibn Mu“awiya. A which was known by the name El-Balansi, that is, "Valencia".

He exercised his government since 802 to 824, building his country residence in Russafa, just outside Valencia, whose gardens were sung by several Muslim poets.

Years later, and in the s. XI, Abd al-Aziz, King of the Taifa of Valencia, He developed and enriched his small state, raising new walls, a stone bridge (where is the Serranos), palacios, mosques, gardens, schools and baths.

Many potentates Cordovan settled in the prosperous city bringing materials, household goods and money to build their homes. Could they bring the pillars of the missing Azahara?

Christian conquest of Valencia can be said that began in 1210 with King Pedro II of Aragon and particularly affects the complex which we are talking. The 11 November King D. Pedro donated to the Militia of the Hospital of St. John of Jerusalem, the farmhouse of Ruzafa and the tower next to it, plus many other possessions in the countryside ... when Valencia capitulated.

While in Alcaniz, your son, the young King James I of Aragon, and with him, his friend the Master of the Hospital, Hugo de Folcalquier and also the noble Blasco Alagón, they spoke of the virtues of the earth, climate and Valencia, encouraging him to his conquest.

The siege of the city hard 5 months. King Yumail Abu Zayyan, He sent his nephew Abu-l-Hamlek, to negotiate fair and favorable conditions. The 29 September of 1238 the capitulation was signed. So says ibn el-Abbar, famous poet, historian and royal representative. The 9 October came Jaime I in Valencia.

Another great historian and geographer Cordovan, ar, works, in his "monumental geography to the- Andalus”, and later El-Udri, They described the walled city of Valencia with four doors, more output, the as-Sarí'a (Eixerea) that connected the city with an extramural esplanade or Musal.la, or area for religious celebrations.

But particularly interested in the description of said door: "Immediate to the door, and inside, the mosque was Sabuliya, which gave its name to the street Jaime I gave to 12 Knights conquerors ... " (Calle Sepolella of the Xepolella, which would correspond to the current Trinquete de Caballeros.

Also near the door the residence of the Emir Azach was ab-bunbedel. A spacious garden surrounding it, with fountains and walkways between them, the area were, oven and azucatchs.

It is this possession, which King Jaime donated to the Militia of the Hospital of St. John of Jerusalem. Well contained in the Book of Distribution. To establish, It is according to the custom of this order, a hostel-hospital: "The houses and abodes of Azach Abunbedel ... and eras that surround".

There they settled freires / Men, using the buildings had and building a temple, the hostel and the area of ​​the cemetery; in ... those eras and orchards surrounding the possession.

All these reminiscences Arabs knew, but ... you have to take a leap of 700 years.

In 1996-97, They were carried out archaeological excavations in the south Patio, cemeterial area or the Joint Hospital of San Juan, when it came to a singular pavement, Islamic, preserved in its original position. A very well locked to pin screed, Red, baked clay, forming a corridor ascending with steps down ... beautiful Gothic chapel, yes, but built on foundations Muslims.

In the center of the hallways appeared a starry source, even with his lead pipe, snugly together bricks together, but lacking in blue glazed tiles which should adorn.

The gardens of the emir, staff surrounding the mosque oratory or Sabuliya. Several historians believe so.

Nevertheless, It was not foreseen recovery, within the project that was realized, approved by the European Commission on Culture, and to prevent deterioration was recapped and postponed for better times.

This finding accompanied another of great importance, a section of the spina of the Roman Circus of the Roman city of Valentia, del s. III. At the bottom of a crypt of the s. XVI. 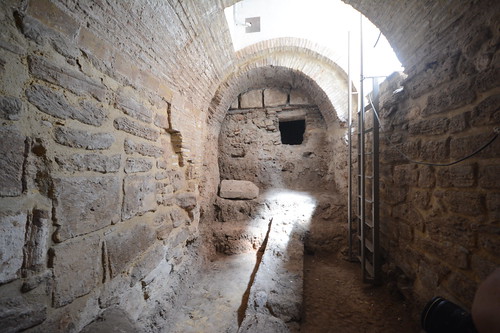