In the heart of the city of Valencia, in the Seu-Xerea district, is the Church of San Juan del Hospital, founded in the year 1238

by the military order of the hospitable Knights of San Juan de Jerusalén, today Order of Malta. You can see here on a VIDEO about San Juan de el Hospital.

San Juan de el Hospital is the oldest church in Valencia After the reconquest, being the first one which was built in the city after that period over a territory granted by the Rey Don Jaime I next door Xerea, next to their camp, in recognition of the energy with which this order he collaborated in the reconquest of Valencia.

The construction of the church was accompanied -following the usual practice of the Order of hospitals-, of a hospital, a cemetery and one residence for gentlemen Of the same. With the exception of the Church, It is fully restored, other structures have survived to this day only architectural remains that are currently in the process of recovery.

On the initial plant occurred changes according to the artistic styles of the moment. Due to various circumstances the building suffered serious damage. See more information on our web page: Church History 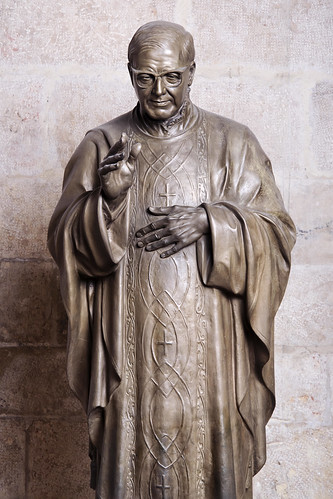 In the year 1967, Archbishop entrusted the Church to the attention of priests of the Prelature Opus Dei, serving the diocese of Valencia. From that moment began a major task in order to retrieve this unique monument of medieval architecture, Valencia and restart the cult, task in which institutions and individuals have collaborated.
At the same time to the restoration work, the dynamism of the church, inspired by the spirit of Saint Josemaría Escrivá, founder of Opus Dei, It undertakes a number of initiatives of worship, formation and catechesis, as well as also various tasks of care type, social, artistic and cultural.

You access it through the ratchet Knights Street, by a patio which include the Crusaders of the 13th century crosses.